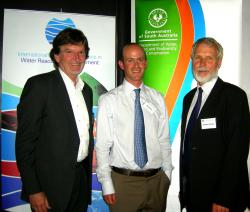 Visiting United States water specialist David Pilz believes Australia is setting an example for many countries with its pioneering work in water trading and markets.

And he’s also pointed to ICE WaRM’s water resources management training programmes as a key in addressing a critical shortage of water industry professionals.“I hear about a major need for hydrologists and for water planners and the only way to meet these demands is to train many more people,” Pilz says. “An arrangement like ICE WaRM’s can cover all the water disciplines in one place.”

“One of the key things is to reallocate water from not very productive to more productive use with a functioning trading market,” he says. “As the world experiences the same water shortages as Australia, it will look to Australia to see how it’s handled the situation.”

Pilz spent six weeks in Australia on a study tour sponsored by ICE WaRM’s Visits and Exchanges Programme and hosted by the South Australian Department of Water, Land, and Biodiversity Conservation.

In Adelaide, contributing to the ICE WaRM Seminar Series, he presented a summary of his work on increasing river flows in Oregon – especially focusing on streams where salmon spawn and rear their young. Click here to view David’s presentation.

Salmon are under threat in many river systems in Oregon because of the withdrawal of water from streams. In some cases, the streams have actually dried up because so much water has been taken by farmers and ranchers.

“We’ve had some success in local areas,” Pilz says. “We have limited resources, so we have to pick our priorities and focus on those. In general, we have a very long way to go. Because of the regulations, there are very high barriers to introducing water trading and markets … but expanding the role of the markets would be a very powerful tool.”

During his stay in Australia, Pilz – a member of the advisory panel helping develop Oregon’s first long-term water plan – also visited the Victorian Department of Sustainability and Environment, as well as the Murray-Darling Basin Authority and the Australian National University in Canberra.