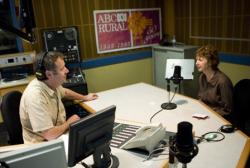 Dr Scanlon – the Senior Research Scientist in the Bureau of Economic Geology at the Jackson School of Geosciences, attached to the University of Texas in Austin – has set five priorities to improve the sustainability of semi-arid farming.

She points out that irrigation was responsible for 90 per cent of the consumption of global fresh water resources in the 20th century, but represented only 40 per cent of global food production. An equation she says clearly doesn’t balance. But she has warned that ’s salinity levels are a significant limitation on the expansion of rain-fed agriculture under the current conditions.

“Rather than taking shorter showers, we all could save much more water by switching from meat to a vegetable- and cereal-based diet,” Dr Scanlon says.

Dr Scanlon staged lectures in Perth, Adelaide, Melbourne, Canberra and Sydney while she was in Ausrealia, all of which were well attended by audiences with diverse industry and government backgrounds. Dr Scanlon also attracted considerable media attention, with radio interviews in Sydney, Adelaide, Canberra and across the ABC’s regional radio network.