The ICE WaRM short courses programme commenced in March with the two day Hydraulics and Hydrology for Non-engineers.

Held in Brisbane, the course was presented by Terry Lucke of UniSA and attended by a group of 14 people, whose work backgrounds were in local government, health or natural resources.

This programme is now active, as the first student from the Netherlands commenced studies at the University of Adelaide this semester.

Applications are now open for students wanting to take part in the exchange, starting in the second semester. 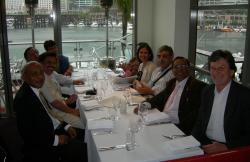 The delegation was led by the Secretary of the national Ministry of Water Resources, Mr Umesh Narayan Panjiar, and included the Chair of the Central Water Commission, officials from the Prime Minister’s Office, other national agencies and state Departments of Water Resources, and senior representatives of ADB.

ICE WaRM is further developing its global profile as we head into 2009.

In the Asian region, we’re reinforcing links with the Yellow River Conservancy Commission (YRCC) in China and the Mekong River Commission.

A second group of future leaders from the YRCC arrived in Australia in January to study under ICE WaRM’s professional development programme. They will spend the next eight months here further developing their skills. 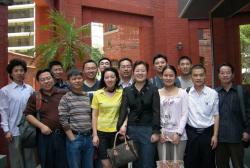 The men and women will spend eight months based in Adelaide studying for ICE WaRM’s Graduate Certificate in Water Resources Management and improving their English language skills. The students also will take part in study tours, industry placements and water management forums. 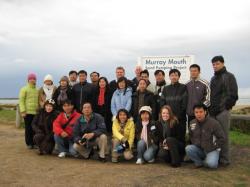 The links between ICE WaRM and the Mekong River Commission have been further strengthened following a visit by Chief Executive Officer Richard Hopkins and International Partnerships Manager Mike Seager late in 2008. 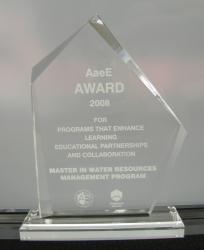 The latest acknowledgement of the Master programme‘s outstanding achievements comes from the Australasian Association for Engineering Education (AaeE), which awarded ICE WaRM its 2008 prize for Enhancing Excellence in Learning through Educational Partnerships and Collaboration with Other Organisations.

The successful students are pictured here with Richard Hopkins (ICE WaRM CEO) at a celebratory BBQ at ICE WaRM’s headquarters in Adelaide.

The students – two from China and one each from Sri Lanka, the Solomon Islands and Peru – have been studying ICE WaRM’s Master of Water Resources Management programme at the University of South Australia, Flinders University and the University of Adelaide.

2008 has been an extraordinary year of success and growth for ICE WaRM.

Over the last 12 months, we’ve made the transition from the grant-funded establishment phase to become a vibrant sustainable organisation well recognised for its leadership and broker role in water resources management education and training.

And with the coincidence of drought and climate change, there has been rapidly increasing demand for ICE WaRM’s services – in Australia and overseas.