In partnership with eWater, we are offering training in Australia’s leading water modelling tools. 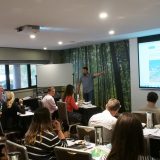 The Australian Water School’s 2nd Gas Policy and Water Management Course, led by Arris Water’s Ben Kele and George Gates from NSW’s Gateway Panel, along with a team of four presenters, attracted 20 environmental assessment and policy officers from across Australia. The spate of black-outs in South Australia, and the threat of power outages along the Eastern Seaboard, has created a passionate debate about energy security in Australia. The speed of the drive towards renewable energy in the electricity market has highlighted the planning gaps in relation to energy reliability and the required transitional infrastructure. 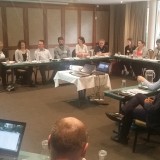 ICE WaRM will play a significant role in the International Water Association’s World Water Congress in Brisbane in early October.

ICE WaRM will present a special workshop on River Modelling for Decision Makers on 9 October.

The 30-minute Webinar, at lunchtime on 30 September, will be delivered by Alister Walsh, Chief Executive of water trading specialist Waterfind.

Waterfind is among Australia’s leading water exchanges, allowing irrigators to trade water through a free online water exchange or through a water broker. Its online trading platform has been used by more than 11,000 customers across key irrigation districts in South Australia, Victoria, NSW, Queensland and Western Australia.

For the second year in a row ICE WaRM organised this successful, highly regarded training course, this time in Sydney.

Places are filling fast for this year’s: Water Modelling in HEC-RAS Course

HEC-RAS (Hydrologic Engineering Centres-River Analysis System) is a computer program, primarily used for the computation of water surface profiles in steady and unsteady, gradually-varied flow situations. It is recognised as an industry-standard program and is widely used throughout the world.

Register now for the: 9th Adapting to Changing Climate: Impacts on Water Management

This course demonstrates the tools and techniques that can be used in adapting to climate variability and change. It also examines the range of responses to climate change on livelihoods and lifestyles at the global, national, regional level.

The School is an intensive 3-day professional short course that is fast becoming the national standard for training in water-focussed organisations, public and private. The School provides an excellent overview of the current technical, economic, environmental and legislative issues associated with water resources management. The controversial issue of desalination came under the microscope at a special workshop organised by ICE WaRM and the National Centre of Excellence in Desalination Australia (NCEDA) in Adelaide. Australian Water School to be a Regular Event

The ICE WaRM Australian Water School is set to become a regular event, following the outstanding success of the inaugural programme in Adelaide in February.

The final two-day Australian Water Industry Essentials course for 2010 has been  staged in Brisbane.

The course, which attracted 16 people from a wide range of water-related industries, was led by Paul Harvey, who has wide experience with the Department of Water in South Australia, and Rod Lehmann, a water engineer from Queensland with experience in the planning and management of water and sewerage supply systems.

Positive feedback has been flowing after the three latest ICE WaRM short courses.

ICE WaRM has unveiled details of its 2010 short course training programmes – including Australian Water Industry Essentials, Hydraulics and Hydrology for Non-Engineers, Policy and Governance and River and Floodplain Modelling.

The Australian Water Industry Essentials one- and two-day courses developed in conjunction with the Australian Water Association are scheduled to start in Adelaide on 25 and 26 February, before moving to Melbourne, Canberra, Sydney and Brisbane during the year. The final course for 2010 is in Perth on 2 and 3 December. 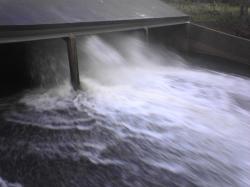 ICE WaRM has delivered the first two-day short course on Hydraulics and Hydrology for Non-Engineers at the Water Corporation of Western Australia.

The course, led by Dr Terry Lucke from the University of South Australia’s School of Natural and Built Environments, introduces the basic principles of hydraulics and hydrology to people with limited or no prior training in water engineering.

Research priorities for the Fleurieu Peninsula Wetlands are being refined, following the second in a series of ICE WaRM’s Living Laboratories workshops in Adelaide in early September.

ICE WaRM recently held a one-day version of the Australian Water Industry Essentials course in response to demand from stakeholders.

The ICE WaRM short courses programme commenced in March with the two day Hydraulics and Hydrology for Non-engineers.

Held in Brisbane, the course was presented by Terry Lucke of UniSA and attended by a group of 14 people, whose work backgrounds were in local government, health or natural resources.

There has been a big response to the first of ICE WaRM’s new Australian Water Industry Essentials programme.

The initial programme, run in conjunction with the Australian Water Association, was staged in Sydney in early July for 25 industry professionals from New South Wales, Victoria, Queensland, South Australia and the ACT